Afbeelding
The front page of newspaper Parool on the 13th of September and Peter Jemison at the Westfriesmuseum. Photos: Kamau Ware
Authors
Kamau Ware

American-Dutch conversations on 17th century colonial perspectives: “We come from that”

American-Dutch conversations on 17th century colonial perspectives: “We come from that”

What are the spectacles through which we view history? The VR glasses at the Westfries Museum of the Golden Age, that guide you through Batavia from a Dutch perspective? Your sunglasses as you take the Black Heritage tour, through which you view traces of slavery on the canal houses on the golden bent? Golden for whom?

The DutchCulture visitors programme that took place from the 9th till the 13th of September was a collaboration with the Consulate General of the Netherlands in New York and the Cultural Heritage Agency of the Netherlands. The aim was to receive a better understanding of different perspectives on Dutch colonial history and the ways to integrate these in exhibitions; the Native American perspective, the Black Heritage perspective, the perspective of forced labour, the position of women, the distribution of wealth.

Our programme became tangible in the headlines of the newspaper Parool on Friday morning: “Gouden Eeuw; dat kan echt niet meer”. After the Amsterdam Museum announced to stop indicating the 17th century with the term ‘Golden Age’, discussions sprouted. The aim for this visitors programme was to exchange, engage and ruffle feathers in the discussion on the multiplicity of perspectives on our shared colonial past and the polyphonical portrayal of that history in museums, and it seemed like it was the right time to do so.

At the Open Air museum in Arnhem we were greeted by curator Hans Piena and academic Hubert Sling, who takes part in the commission for the Canon of the Netherlands, a broadly used tool for educating history. The museum that was founded over a hundred years ago, is thinking about how to exhibit different perspectives on the history of the Netherlands. But how do you integrate these different stories, instead of assigning each its own corner? To tell more stories, you have to work together with more people, and that is how we came to sit at a very long lunch table. Joyce van Steenveldt, an Anansi storyteller, Rien Sohilait, an advisor to the Molukken barracks project and Jet Bakels, of the knowledge centre for intangible heritage, joined us in our conversation and visit.

Heidi Hill, one of our four visitors and site manager of historic sites Crailo House and Schulyer Mansion, has researched upon ways to tell the narratives of the people connected to these sites; the landowners, the enslaved, the Native Americans. She is currently working on an exhibition for 2020, about the position of Dutch women in 17th century New Netherlands. In the discussion with the Open Air museum on telling women’s history, we found that sometimes a women’s history is told as opposed to a men’s history, a treatment common to alternative perspectives. We were able to discuss the importance of not telling stories as standing opposite or next to each other, and rather as intertwined storylines, depending on each other. 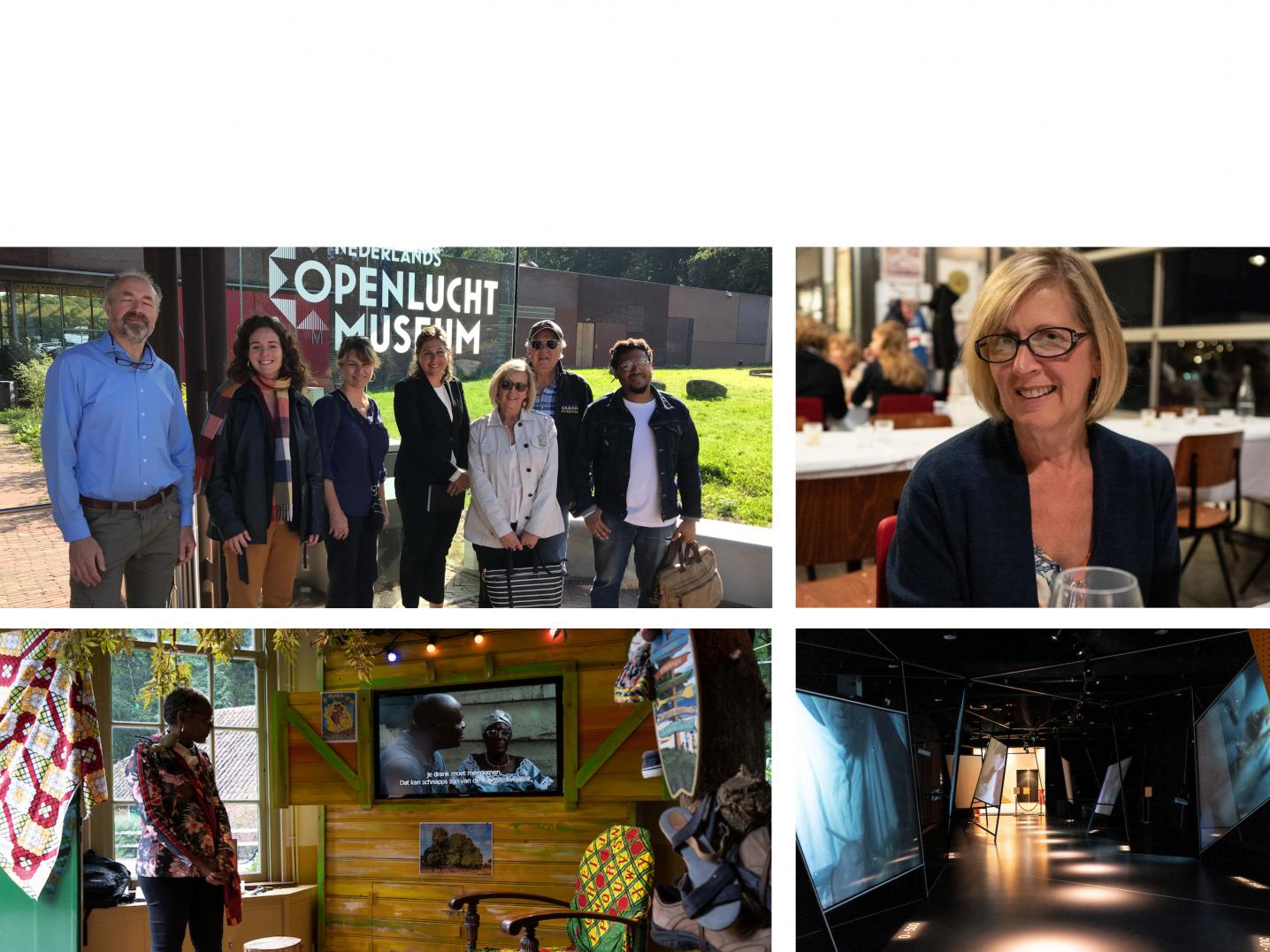 The National Archives of the Netherlands are unlocking untold stories in their archives by abandoning the paved ways that power structures of colonialism and imperialism have indicted in the past. We were told about this initiative by Charlotte Labrie and Jeftha Pattikawa, who participate in a project group for inclusion, aiming for an exhibition next year. They just started and were excited to discuss with the American visitors, as they shared glances at 17th century archival documents.

In the afternoon, our four Americans were able to present their work; the ways they exhibit and communicate with their public back home. 50 peers from the Netherlands and beyond engaged into conversation at the Amsterdam City Archives, with archive researcher Mark Ponte opening the event. It was an enriching afternoon with many stories intertwining; the preservation and awareness efforts of First Nation communities, Black Heritage in broad daylight, the learning process of integration, and how rethinking your exhibition can start with a single question. The importance and entanglement of the different perspectives became increasingly visible and the afternoon left everyone with the wish and need to continue this exchange. 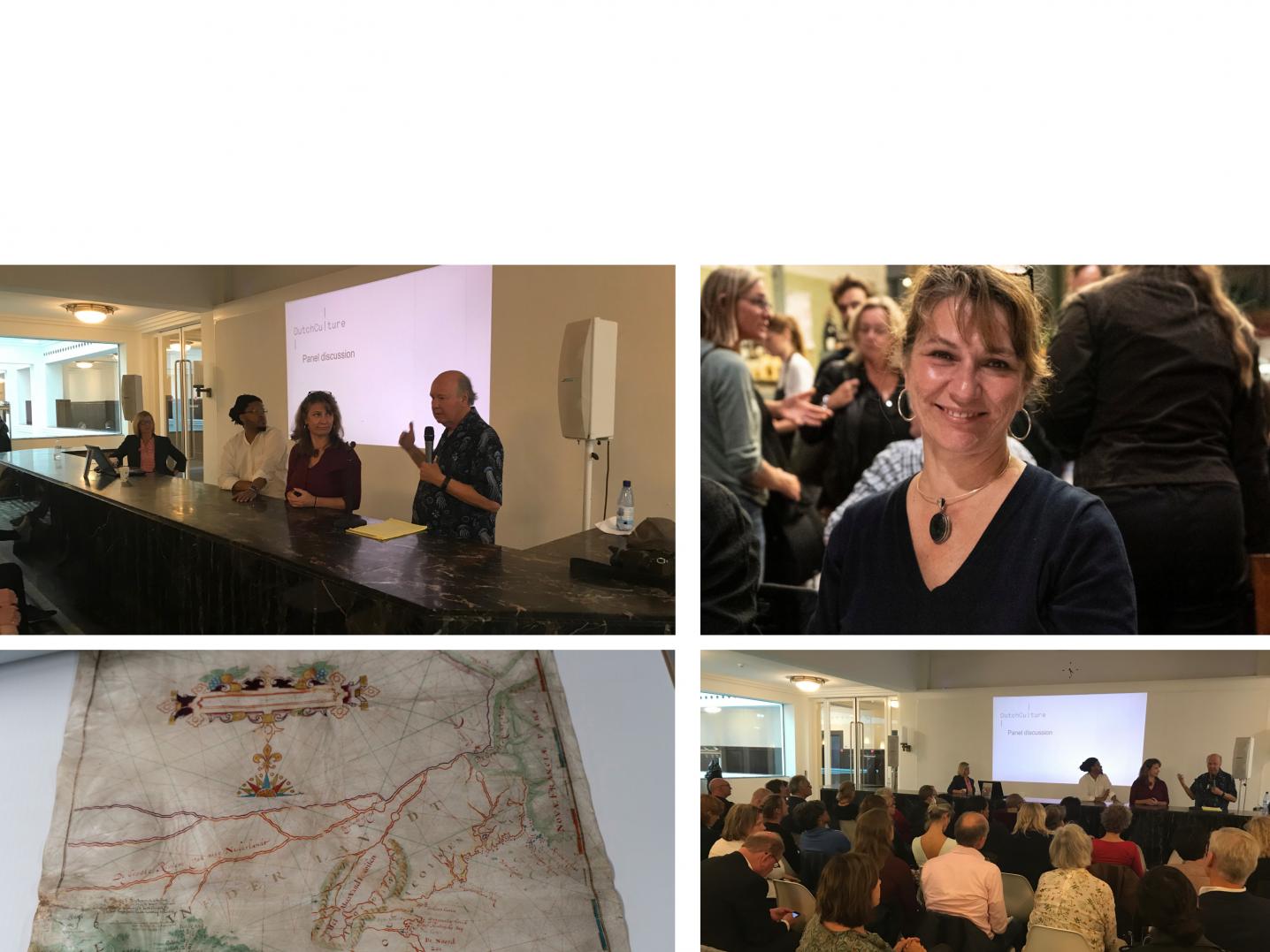 The second visitor to introduce, Josephine Bloodgood, manages seven historic houses at the Historic Huegenot Street in New York State. She has many perspectives to consider in her daily work; the French, English and Dutch colonial presence and their relation to Native American and Afro American history. How to present the abundance of richness and trade in the 17th century, whilst at the same time revealing their ties to forced labour and oppression? At the Westfries Museum in Hoorn, we met Ad Geerdink who guided us around the multi-layered exhibitions of his museum. Including activities for the community, like the trial of the Jan Pieterszoon Coen statue and the Sunday walks that tell the story of the black boy Tabo. It seems like the museum does not shy away from difficult conversation. What about the intentions of the visitor, what spectacles does she or he bring? How do we integrate the difficult with the gold?

This was subject of our conversation with Vera Carasso of the National Maritime museum as well. Are spectacular sea battles and popular figures like Michiel de Ruyter compatible with that other story from the sea, one involving human trafficking and displacement? Choosing your words carefully, is an approach the museum upholds, by for example replacing words like ‘hero’ and ‘discovery’. Another method is stimulating conversation, by displaying a black porcelain figure in the middle of an exhibition space. A thought-provoking statue that visitors cannot miss to see. 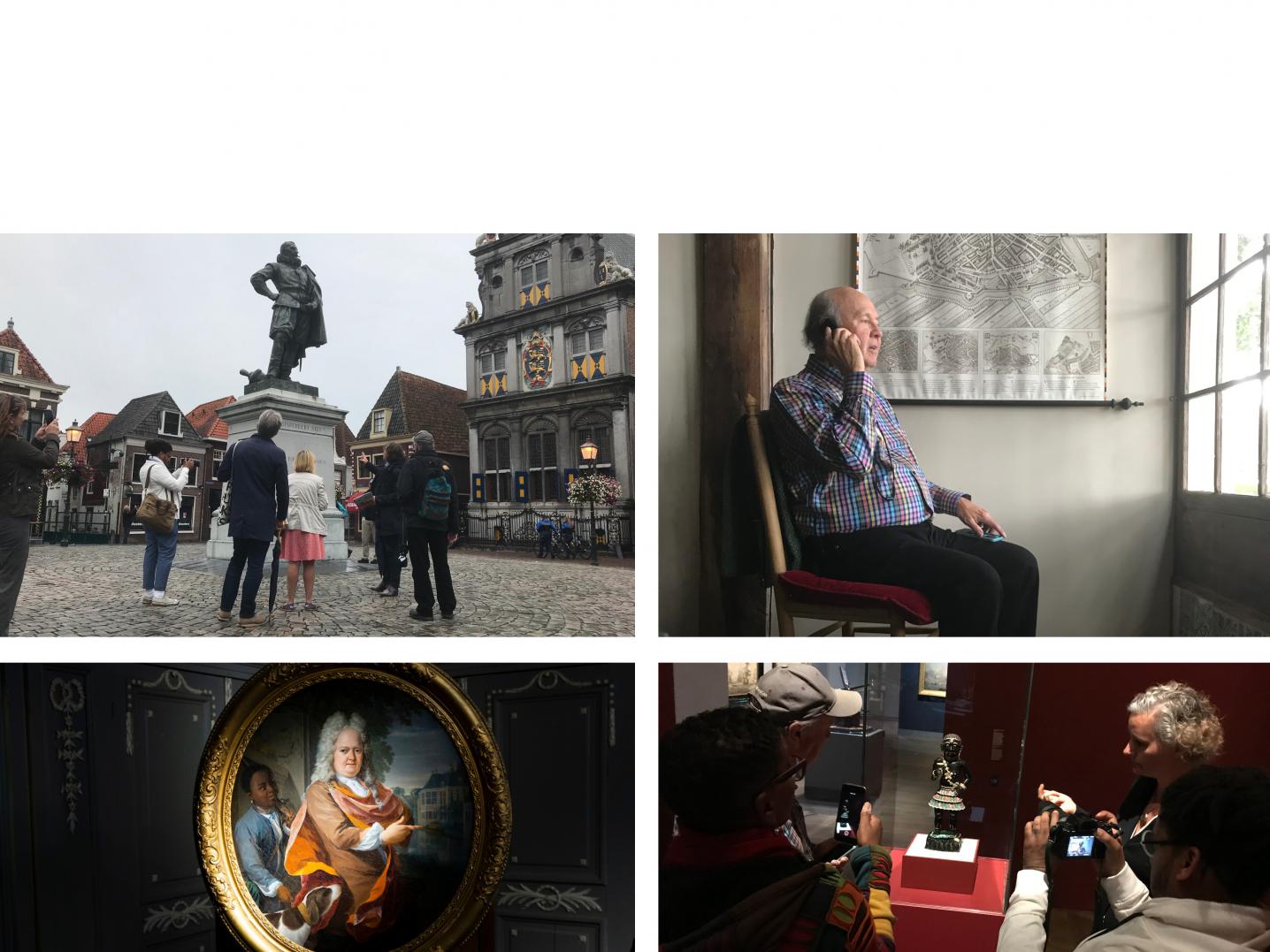 The Black Archives in Amsterdam, carried out by the New Urban Collective, was founded by then-students Mitchell Esajas and Jessica de Abreu. By gathering physical documentation of black presence in Amsterdam over the centuries, they aim to resurface stories of Amsterdam inhabitants of Surinam and African descend. Four years later they collaborate with important museums and institutions in the Netherlands, to change the collective memory of the city.

Our meeting with the classical Museum van Loon, that exhibits a rich family home on the Keizersgracht, proofs that museums feel the urgency to contribute to making the collective memory more inclusive. The museum is exploring the family van Loons involvement in slavery for the first time, with the exhibition ‘Aan de Surinaamse grachten’ opening next week.

Kamau Ware, the third visitor and the founder of the Black Gotham Experience in New York was startled by a question he received as a tour guide in Lower Manhattan from a young girl. She asked where she could find the story of her people in the city today, the history of the Afro-Americans. Kamau’s visual art studio has been creating experiences of the neighbourhood ever since with artistic visuals filling in the gaps in the documentation of black history. At his Nerdy Thursday events he geeks out with other history enthusiasts about the history of his city, a practice that accompanied the group throughout the week. Jennifer Tosch, the founder of the Black Heritage Tours, started from a similar question. While studying in Amsterdam, she wondered about the missing stories of the people of Surinam in the city’s history. By taking people through the material memory of the city’s canals, she guides their gaze to the traces of slavery and the black community, pointing out their entanglement with the present day.

This day, that closed with a lecture by American writer Colson Whitehead in the Tropenmuseum, was not just about Black History. In the words of Kamau: ‘”So it is just a way of acknowledging and considering that whatever happened in the past it is happening right now in some way, form or fashion. We come from that.”’ 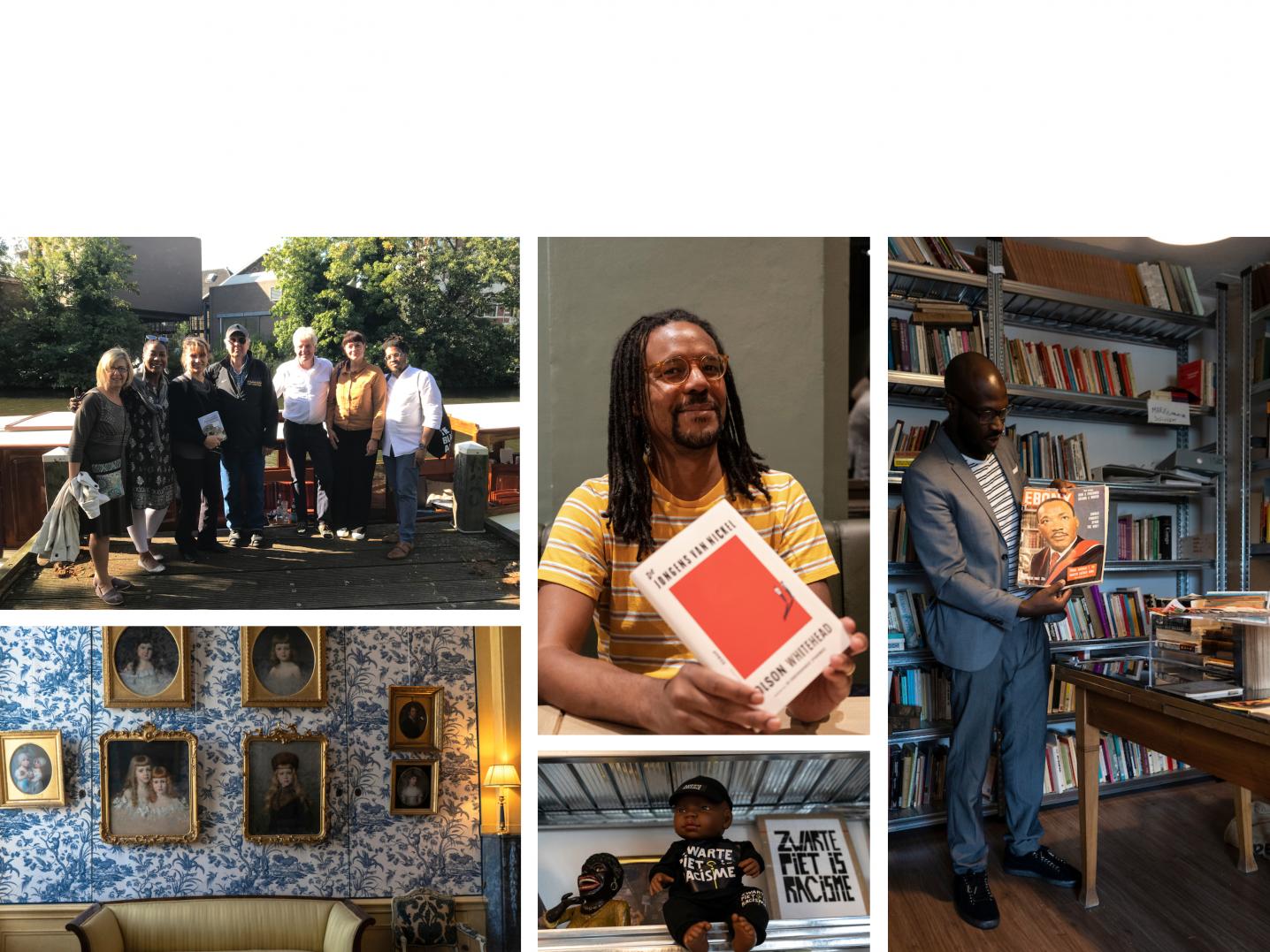 Gerald “Peter” Jemison, our fourth visitor, was the last to join the program and is the last to be introduced in this piece. He has been historic site manager of the Ganondagan State Historic Site, once the capitol of the Seneca Nation, since its opening in 1987. The influence of the Seneca Nation on Dutch history doesn’t seem to play a big role in our collective memory, yet the trade between the Dutch and the First Nations people in the 17th century has made a great impact on both sides. We need only look at 17th century master pieces like Rembrandt’s Night Watch to see the beaver furs the Dutch obtained from the Iroquois or Haudenosaunee people that Peter descends from. In every black fur hat from that period, we can see our shared history.

At the Volkenkunde museum in Leiden appreciated connections were made, and we met contemporary First Nations artist Yatika Fields, who created a colourful mural, juxtaposing ancient tradition and street art. After a very informative tour through Amsterdam of the 17th century trading companies, by the University of Amsterdam affiliated Lodewijk Wagenaar and Ranjith Yayasena, we finished the program where art and history combine: the Rijksmuseum. Martine Gosselink, curator of the Rijksmuseum and expert on both New Netherlands history and colonial history, was kind to engage in a final conversation with us about the multiplicity of perspectives, a conversation that has both enlightened and disturbed us throughout the week. Finally, Yuri van der Linden took Heidi, Josephine, Kamau and Peter on a long-awaited tour through the Rijksmuseum. Yuri van der Linden, Marike Snoek and Jinna Smit from the Cultural Heritage Agency of the Netherlands had accompanied the visit throughout the week, connecting and reflecting in between visits. Seeing how our First Nations expert, Peter Jemison, was the last to be introduced to you, he can have the last word. This is a story from his people, on meeting in the 17th century:

“When people came to visit us, came to our town, they had made their way here. They had walked, they canoed, however they got here. The first thing we did, was something called Edge of the Wood greeting. The edge of the woods was a clearing before town, and someone would go up there and use what we call the three bare words: We will clear your eyes out so you can see, maybe you lost somebody or a loved one on your way here, and we are going to help you remove those tears from your eyes; we are going to give you a drink of spring water, so you can express the reason why you have come here and talk to us; we are going to open your ears with a feather, so you can hear our answer to you. Then we are going to find you a place to sleep and eat, and the people you want to speak to will come to where you are and you will have a conversation.”[1] 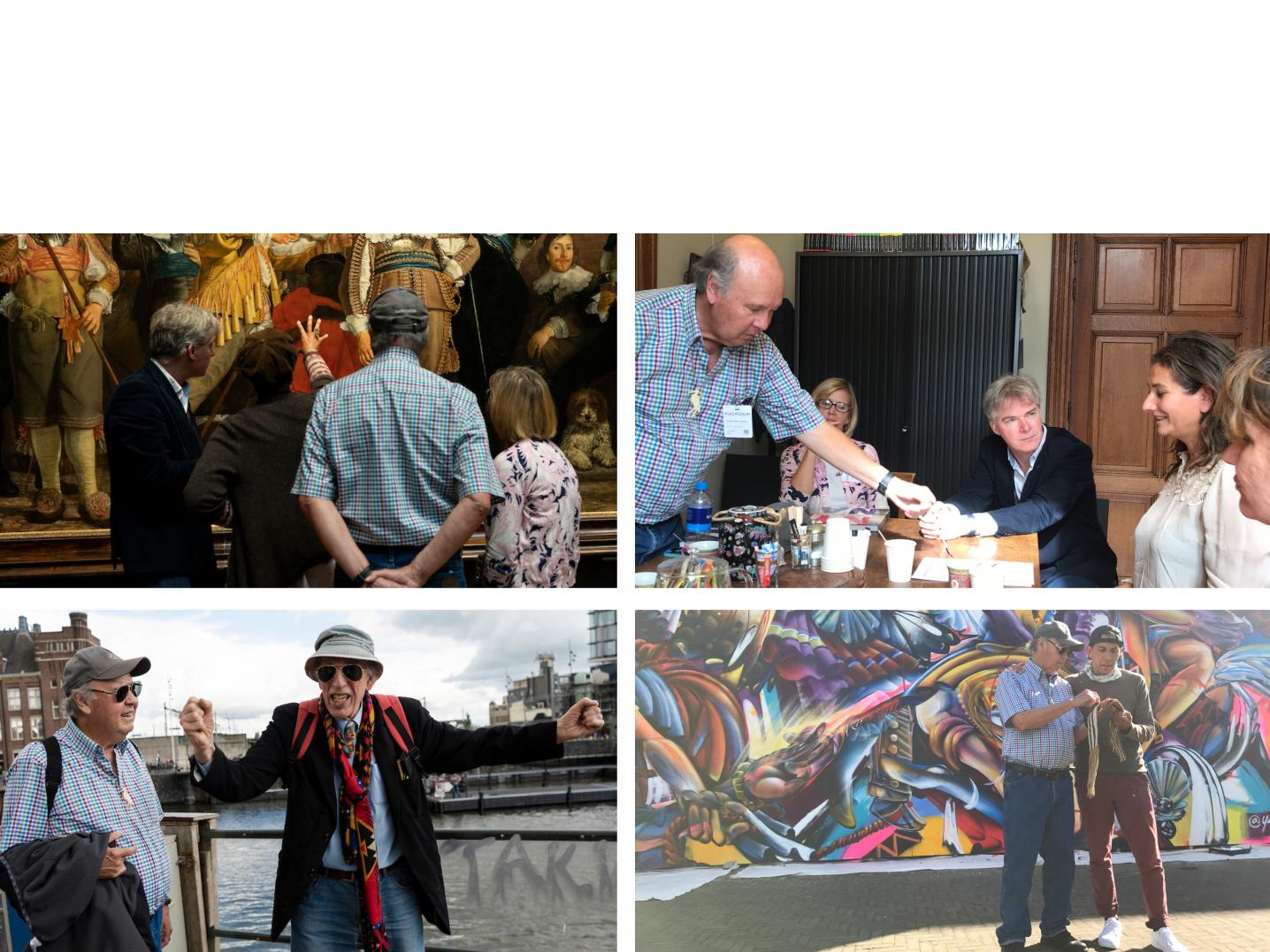 Caption
From left to right: Yuri van der Linden, Jennifer Tosch, Peter Jemison and Heidi Hill at the Rijksmuseum; Peter gives a token of the Seneca nation to Martine Gosselink at the Rijksmuseum; Peter and Lodewijk Wagenaar during the city tour of 17th century Amsterdam; with Yatika Fields at the Museum of Ethnology in Leiden. Photo 2 and 4: Renske Ebbers. Photo 1 and 3: Kamau Ware.
Authors
Kamau Ware
Renske Ebbers

Do you want to know more about a cultural exchange with the United States of America? Find everything here. 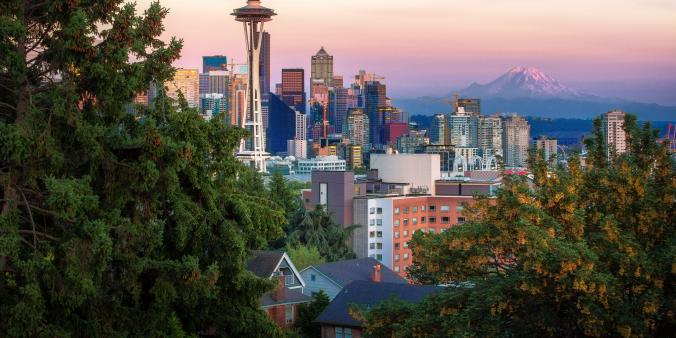 What do the numbers say: Edition U.S.A. brings you a summer newsflash on Dutch arts & culture 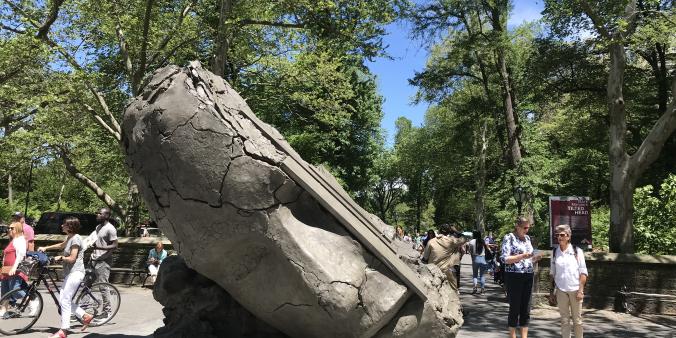 Cultural Attaché Joost Taverne about working as an artist in the U.S.A.: "I really recommend roads less travelled"